I was fortunate enough to get my hands on a pair of MikroTik Audience devices to put through their paces. The Audience is a new device from MikroTik, and perhaps one of the first I’ve seen that is specifically targeted to a home environment, with the stylish exterior designed not just to be a wireless powerhouse but look suitable to be placed on a shelf and give a better connectivity experience to boot.

MikroTik are hitting some home runs with design and professionalism recently. This seems like the next step in the evolution from wAP form factor and Wireless Wire kit we have the Audience – and upgrade to both router design and packaging, opening the Audiences is more akin to an apple unboxing than anything else to come out of Mikrotik. Sure it’s nice that the boxing is still relatively simple and recyclable, but it LOOKS like what you’d expect a high end home router to look like; and I’d have no trouble selling this to someone as an upgrade on whatever they’re using now (it really is, but we’ll get to this..).

Because I’m a heartless bastard and I know so many Latvians worked for years to create this device, I had to take one of them apart straight away before powering it up. More importantly, I had to try and do this without breaking anything, because I have to put it back together and test it afterwards. Easier said than done, but possible!

Check out the gallery of photos below with instructions on how to disassemble the device, if you’re that way inclined.

Onto the performance, this device has quad core 716MHz CPU which can be pushed as high as 896MHz (if you’re the sort of person who feels the need to overclock your router) or as low as 488MHz if you plan on the heatsink being a paperweight. During my testing I was unable to max out CPU utilisation while performing any basic routing or wireless functions and as per MikroTik’s testing this should be capable of a few hundred megabits of IPSec encrypted traffic if you have need of it. There are 3 distinct wireless cards available:

Technically there’s nothing stopping a power-user from re-configuring the second 5GHz wireless card as another access point for clients, and if you just had the one Audience device I would probably recommend this for the better MIMO performance – however it was designed with a specific goal in mind – which is meshing.

In my testing – the meshing radios were able to hold a reasonable connection (consistent 60Mbps throughput using btest) through 4 double brick walls and one wooden garage wall. I placed one unit in my lounge room and the second in the detached garage at the other end of the property (a distance of about 24M / 78 feet).

By comparison, previously I have used a set of (non MikroTik) Ethernet over power adapters to deliver 60~Mbps from my office to the ground floor of this house, due to a lack of Ethernet cabling, but switching to the audience units has given me a reliable 300Mbps over the mesh wireless link in the ‘factory’ configuration, or as high as 500Mbps (through 2 walls and up one level) when adjusting the configuration of the mesh radios to use an 80MHz channel.

Even without using the mesh functions I did not coverage around the house also increased noticeably with just the one unit. I suspect some of this is a byproduct of being able to locate the AP on top of furniture, and the antennas being well positioned for good ‘home’ coverage due to the router being stood upright (vs a hAP ac2 which can be mounted on a wall/inside a cupboard/stood on its side).

It’s worth noting at this point – using quickset to configure this device actually employs the use of CAPsMAN to configure each wireless radio (including those of any repeaters) which is the first I’ve seen a product making use of MikroTik own built-in wireless control system.

I am sold on the Audience and suspect I will continue using it as my primary AP(s) at home until something better comes along, but that’s not to say I don’t have some gripes.

The MikroTik Audience is a well designed and thoroughly capable wireless home router at a price point enticing for gamers and power-users alike. While it lacks the physical connectivity options of some competing platforms, everything about the device makes it clear it wasn’t design to sit connected to a modem/radio or ONT gathering dust in the cupboard – it is well positioned to deliver on the promises of better wireless by providing a platform that looks and feels like part of a modern home and in light of this I can’t wait to see what comes next.

I’ve been playing around with v6.13rc12 over the last week on a CRS125-24G-1S and have put together a an example script for provisioning the unit with a user-vlan and an admin-vlan that are trunked back via the SFP port.

I’ve been waiting for a long time to have a usable and readable switch chip config on the CRS platform, so I hope this is useful for some of you guys too.

END_OF_DOCUMENT_TOKEN_TO_BE_REPLACED

In todays episode of “why is this $thing not working?”

This access point won’t power up. I shook it and heard an odd sound.. That’s nasty. And so ends the life of an access point. Thanks to Mike Hammett for Sharing this with me. 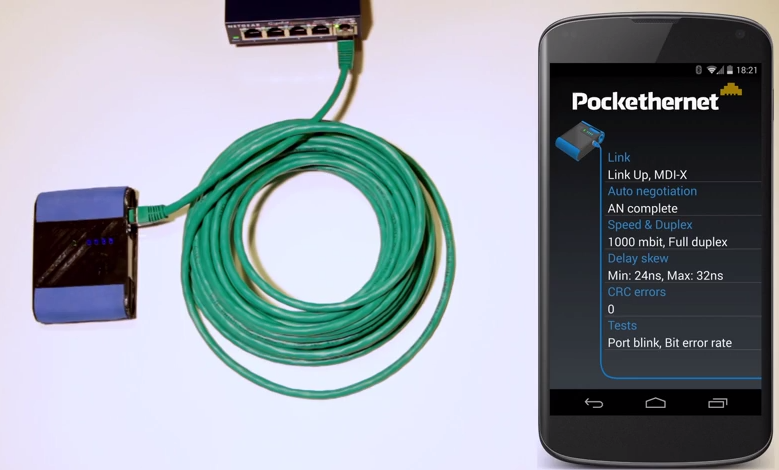 For anyone dealing with lots of ethernet connections, be that PoE runs up towers or 48 port switches providing to office desks, hotel rooms etc, we’ve all had to test and troubleshoot connection issues.

These can range from physical connectivity problems like:
– Cable run too long

Then there’s the connectivity tests after you fix and test the wiring:
– Does auto-negotiate work?
– Do you get DHCP or can you see other IP’s on the network?
– Does the port show any CRC errors?

) to test wire pairs, use TDR devices to determine if a wire is broken and if so how far along, then test physical port connectivity and errors.

So in come the guys from Pockethernet, with the following solution:

They’ve combined all of the features listed above and made it simple to use by connecting it via Bluetooth to your smartphone. Then on top of that they’ve made it incredibly cheap in comparison to the alternatives.

At present they are shipping to the US and EU only, but using a service like shipito you can have it forwarded anywhere in the world, and as they’ve already reached the minimum contribution amount it’s safe to say this project will be going ahead.

I’m really glad to see a useful project like this take off, it is an excellent innovation and is going to be a very useful gadget for network techs to have in their tool bags.

This was spotted today in the Mikrotik Wiki’s supported hardware list.

RB SFP3903D listed as 10G and working in a yet to be announced product (TBA).

Are they  referring to another as yet unannounced model of the CCR or something entirely new? More info here as we find it!

This would lead us to believe the SFP in question is a 10Gig SFP+ module intended to work in an as yet unannounced CCR model,  joy to the routing world!